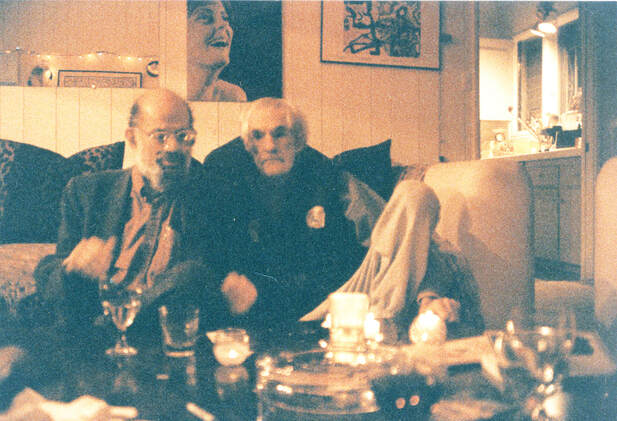 Ginsberg and Leary in Timothy's living room. Susan Sarandon painting by Ferris on wall behind them. Private Collection, sold thru Christies. See Sarandon painting below in revolving images.
TIMOTHY LEARY COLLECTION: Below are only a few of the images made with and for Timothy Leary.  This series of art has a dash of photo realism with surreal. No longer a style Ferris uses, Timothy Leary found a way to put her art to use from the early 90's until his death in 1996.  Michael Horowitz, archivist and book editor decided she'd be perfect to illustrate his book, Chaos and Cyberculture. Ferris also acted as an art director for the book.

Chaos and Cyberculture was printed in 5 languages. ONLY 1st edition kept all images including images by Brummbaer, Robert Williams, and Vic Keller.

​If you are interested in buying a print or two, check out the link below for Flashback Books on Canada Ebay site.  From there, check out his store for the single Leary prints, most of them were used in Leary's Chaos and Cyberculture book.

The William Burroughs graphite on board below. Allen Ginsberg gave permission to use a photo taken of Burroughs for the image.


​Burroughs was shooting holes in board at the time to splatter paint, and was calling it Shotgun Art, hence the targets behind him. Perry Farrell Collection - Janes Addiction, Lollapolloza. Image also featured in Architectural Digest along with other spot features.


The colored image of Timothy Leary looking up is called Multimedia Tim. It is one of the few art images Timothy worked on.  Image printed in 2 books Mark Dery's Escape Velocity and the cover of Chaos and Cyberculture as well as many magazines and newspapers.  Sold at Christies, New York. Collector unknown.

In the video below, you'll see an image of David Byrne.  A three dimensional painting. One of Timothy's shirts was torn and painted to build his jacket.  Byrne, Leary, and Ferris all created this painting together.  Roger McNamee Collection.

One image created for one of Ferris' favorite part of the Chaos book.  It was a story not written by Timothy called: Brillig In Cyberland. (Unknown author.)   A man falls asleep and awakes as a woman. Being invited into this trippy realm by Timothy and the unusual character with fiber optic tubing instead of hair.  (Characterization of Michael Horowitz, Timothy's editor and archivist.

The Tantric couple naked was refused by Timothy for the book, he said, "my grandchildren will see this."  Clothes were put on the couple with a couple visual body parts still exposed. Timothy then accepted it.   Perry Farrell Collection - Janes Addiction, Lollapolloza. Image also featured in Architectural Digest along with other spot features.

Order this assortment from Flashback Books, Canada.  All signed by Timothy Leary and Carolyn Ferris

Under Flashback Books Ebay store, do a search.  Some of these are listed as a single print.


ALL IMAGES BELOW ARE COPYRIGHT CAROLYN FERRIS CIRCA 1990-1996